Welcome Guest, new here? Stopping by again?
Want to post?
Well you can, if you just join the forums!

We are currently updating. You can still post, but you may see some few changes.
Write fan fics for people to read, or for your pleasure!
Log in
Control Panel
Statistics
We have 114 registered users
The newest registered user is difficour

Who is online?
In total there are 4 users online :: 0 Registered, 0 Hidden and 4 Guests

» They are really great romoddles

» TPBM (the person below me)

» Need to know what the Banner size is

You are not connected. Please login or register

the text that changed everything 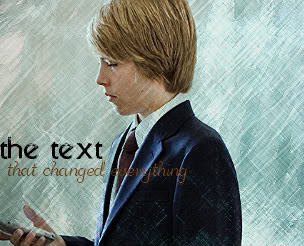 Cole gets a text message from someone, but he doesn't know who...yet


"Awesome job guys, your ratings are going through the roof... again!", Dylan & Cole's manager said to them, waving the papers like a maniac.

Dylan smiled like an idiot, and turned to his younger brother. "Dude! Were so good.", he slapped his brothers' hand.
"Yeah...",
Cole sighed turning to leave the studio. "Wait! Where are you going?",
His older twin asked, catching up to him. "I'm leaving to go to a
restaurant, thats all.", He said simply, getting his keys.
"Sure... you and Debby better not... you know...",
Cole turned to his brother.
"What?", he raised his brows.
"Nevermind. Go fuck her up.", Dylan laughed, and left the studio.

Cole's phone vibrated from his right pocket, and saw his screen light up.

"Hey baby, wanna get down?"

Cole read the message again, but it was a blocked number. "who the hell is is this?", he texts back.

Another vibration form the phone was within seconds. "You know who I am, and damn well. I guess I'll have to finger myself... *smirks*", Cole was getting hard by the second.

Cole reads the message:
"I want you to fuck me so hard, and I want to be in writhing pain when you do so."

Cole swallowed hard, knowing that his pants were getting tight. "Yeah... ok.", he texts back. He felt like he was being watched, and he never gotten a sexting before... but to him... it was really arousing.

Oh gawd. Cole got in the car, and unzipped his pants, letting his dick breathe. He felt like he was going to explode in his car. But he wanted to know who this girl is, and he wanted her very badly.

Soon enough it started raining, pouring on his windshields, and his wipers. Then he heard a knock. Cole quickly got his pants on, and trying to see the hooded figure, but it was raining so hard that he couldn't see outside.
he unlocked the door, and the hooded figure came in. "Hey baby...", the hooded figure seductively said. Cole was overall turned on, "Hey...", he drawled, smirking at his word.
"Fuck me.", the hooded figure put the hood down, and smiled at him.
"Debby?"

Re: the text that changed everything